Terre Armée and Freyssinet have been involved in the construction of Casablanca’s major new structure, the Sidi Maârouf Bridge.

Started in 2015, the cable-stayed bridge is being built as part of the redevelopment of the Sidi Maârouf junction initiated by the city of Casablanca. Funded by the municipality and the General Directorate of Local Authorities, the project comprises the transformation of the junction into a three-level urban interchange made up of a cable-stayed bridge and its access ramps, two large roundabouts and their slip roads, and two one-way underpass sections.

At 224 metres long, the structure is characterised by the composite design (steel/concrete) of its deck and tower. This latter, which is 75 metres tall, was purposely designed on a slant by architect Frédéric Zirk and resembles the mast of a sailing boat with the stay cables as sails.

Terre Armée and Freyssinet were selected to contribute to the project:

Between 2016 and October 2018, Freyssinet supplied and installed the 27 stay cables, the prestressing, bearings and joints. The bridge deck is supported by 27 stay cables arranged in two lateral planes and one central plane, weighing a total of 102 tonnes.

When it is opened in late 2018, the bridge will relieve traffic congestion, which reaches 17,000 vehicles/hour at peak times, ensure that the junction interacts smoothly with the tramway, and provide a free-flowing link between Mohammed V Airport and the various business centres in the area. 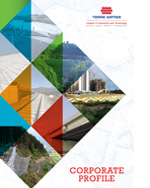