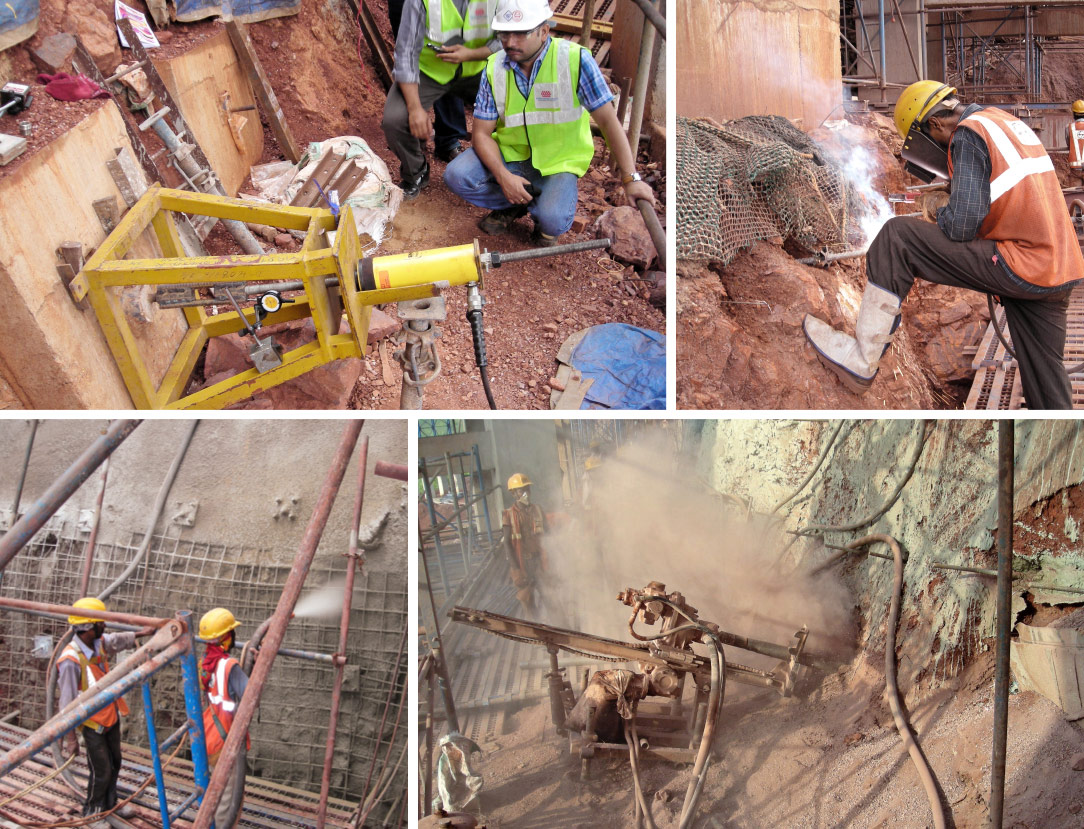 This project was located at Joda, Odisha, in eastern India. It was a brown field project and Larsen And Toubro Limited (L&T) was the main contractor appointed by Tata.

Since the mine was on hilly terrain, the construction work involved lots of excavation and filling. Due to the excavation, some exposed slopes became vulnerable to erosion and a few slopes started falling. The Secondary Crusher House and JNT-3 was constructed on a bench of the hillock, where the slope was steep, exposed and 17m high (one bench of 10m and another of 7m).

Odisha is very close to the Bay of Bengal and the monsoon is quite heavy here. After the first year’s monsoon, the slope below the Secondary Crusher House and JNT-3 started failing from different pockets due to severe erosion. The steep slope became even steeper, almost vertical in many places. L&T identified the potential risk of for the crusher house and called Terre Armée in India for a durable solution. Slope stability analysis was carried out and Galvanized TerraNail® was proposed by Terre Armée to stabilize the slope.

We began to install TerraNail® in May 2012. After commencement of the work, the first challenge was to tackle the unstable slope during the heavy monsoon of this region. Problems arose during shotcrete due to non-availability of dry sand. Ensure safety of workers against temporary failure of the slope surface was another challenge. Adequate measures were taken to avoid unsafe situations. The L&T project team and the client, Tata Steel, also cooperated at their best to overcome these challenges.

In a detailed design process, Terre Armée in India used in-house technical know-how to design the in-situ soil reinforcement in the form of grouted TerraNail® to stabilise the slope. The design had to consider the additional surcharge load coming from the structure on top of the slope. It was a tailor-made solution for such critical site conditions.

The design principle was based upon classical theory and Bishop’s stability analysis. The design was carried out for stabilization of the existing slope using in-situ soil reinforcing nails. As per the design calculation, the length of the TerraNail® was 9m and 7m. After the design was prepared, on-site pull out tests were carried out to validate the design. The design considerations were found to be in conformity with the actual bond strength derived from the test.

The construction process involves drilling inside the slope to a desired depth, inserting the TerraNail®, grouting the hole and applying shotcrete on the slope surface as a facing. Tensile stress is applied passively to the nails in response to the deformation of the retained materials during subsequent excavation activities. The grout is provided to serve the primary function of transferring the stress from the soil to the nail.