‘TechAbutment®’ for five Vehicular Underpasses for REWA, MP/UP Border section of NH-7, in the state of Madhya Pradesh, India 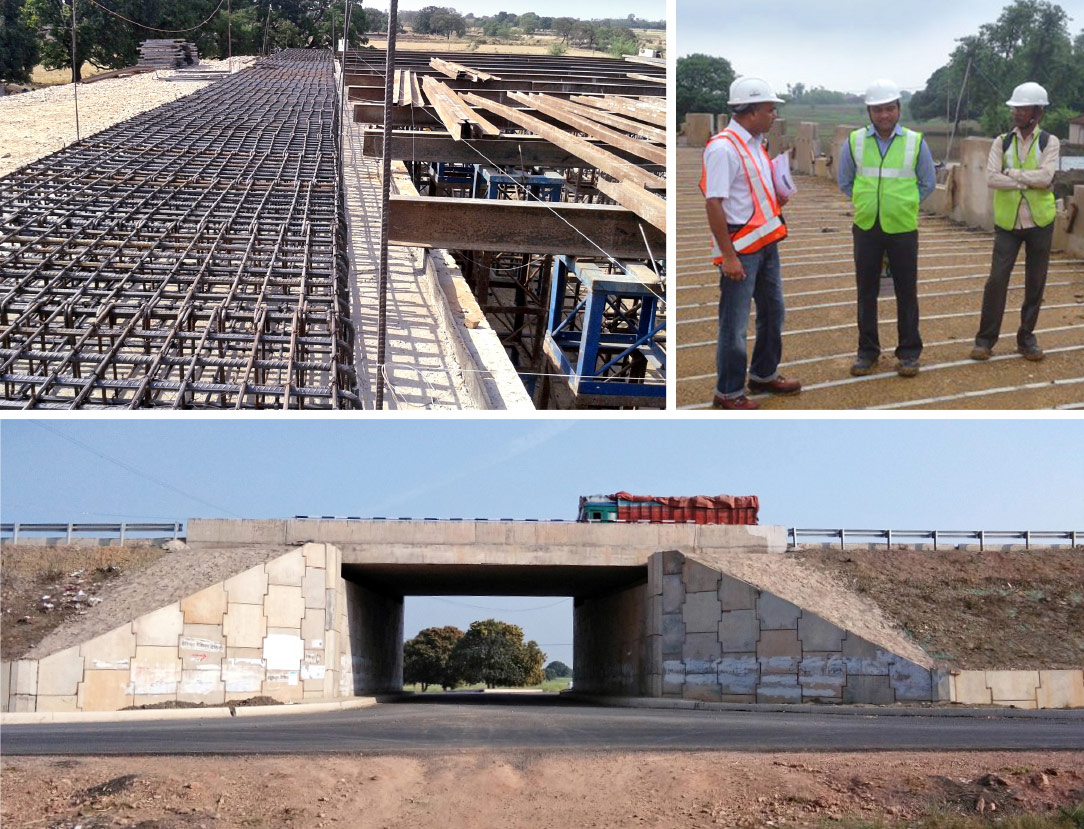 Four lanning project of REWA-MP/UP Border section of NH-7 for 89.3 km in the state of Madhya Pradesh was awarded to Vindhyachal Expressways Pvt Ltd, a Special Purpose Vehicle formed by JMC Projects India Ltd who appointed Dilip Buildcon Ltd (DBL) as contractor for this project. DBL entrusted Terre Armée in India to design and provide Reinforced Earth® system for wing walls of the Vehicular Underpasses.

Terre Armée in India made the technical proposal of construction of TechAbutment® for these VUPs. Terre Armée in India realized that Post Tensioned TechSlab, in this case, could optimize the thickness of the slab to 750mm, which would reduce the dead load on the TechAbutment®. Accordingly, value engineering was done with Freyssinet. It was also considered that the thin top slab also would reduce the length of both the approaches reducing the back fill quantity as well as the anti-crash barrier system. Freyssinet Menard India, a sister company of Terre Armée in India, was roped in for the design and construction of the PT slab in the project.

Initially, work was started at Ch. 222+490 at A1 side, Ch.218+790 at A1 side and Ch. 193+350 at A2 side during the months of February, March and April 2013 respectively. However, due to land acquisition issues on other ends, fronts were not available for erection at the same time. The work could not continue at available fronts due to heavy rainfall in monsoon.

It was also observed that the backfill material selected for the work was highly plastic and not acceptable for use. Terre Armée in India suggested to DBL to increase the percentage of well graded coarser material in the backfill to achieve the desired index of plasticity. Post monsoon, all the five fronts were opened for construction. The construction of TechAbutment® for these five structures was satisfactorily completed by May 2014. By this time, Freyssinet Menard India had also started their activity for Post Tensioned TechSlab. The underpasses were successfully completed by September 2014 and traffic was commissioned.

In a detailed design process, Terre Armée in India used in-house technical know-how to design the TechAbutment® using High Adherence Galvanized Steel Strips (50×4, HA) confirming to ASTM A572 – 93 Grade 65 (steel strips with minimum tensile, strength of 630Nmm-2 and yield strength of 480N/mm2) as soil reinforcement. Design was carried out as per BS 8006-1995. Loadings on the wall were considered as per IRC (Indian Road Congress):6-2010 guidelines. Seismic design was done based on French standards AFNOR NF-P 94-220.